Design an investment strategy that adapts to changing market conditions. Proactively capture your sources of return.

Focus On Your Alpha

Unlock portfolio performance with unique insights that help capture the sources of your strategy's performance and reduce external noise from the markets.

Identify the most critical factors driving your portfolio risk and manage their impact to your strategy.

Our platform helps uncover even the most subtle shifts in market trends to help isolate the value drivers of your portfolio. 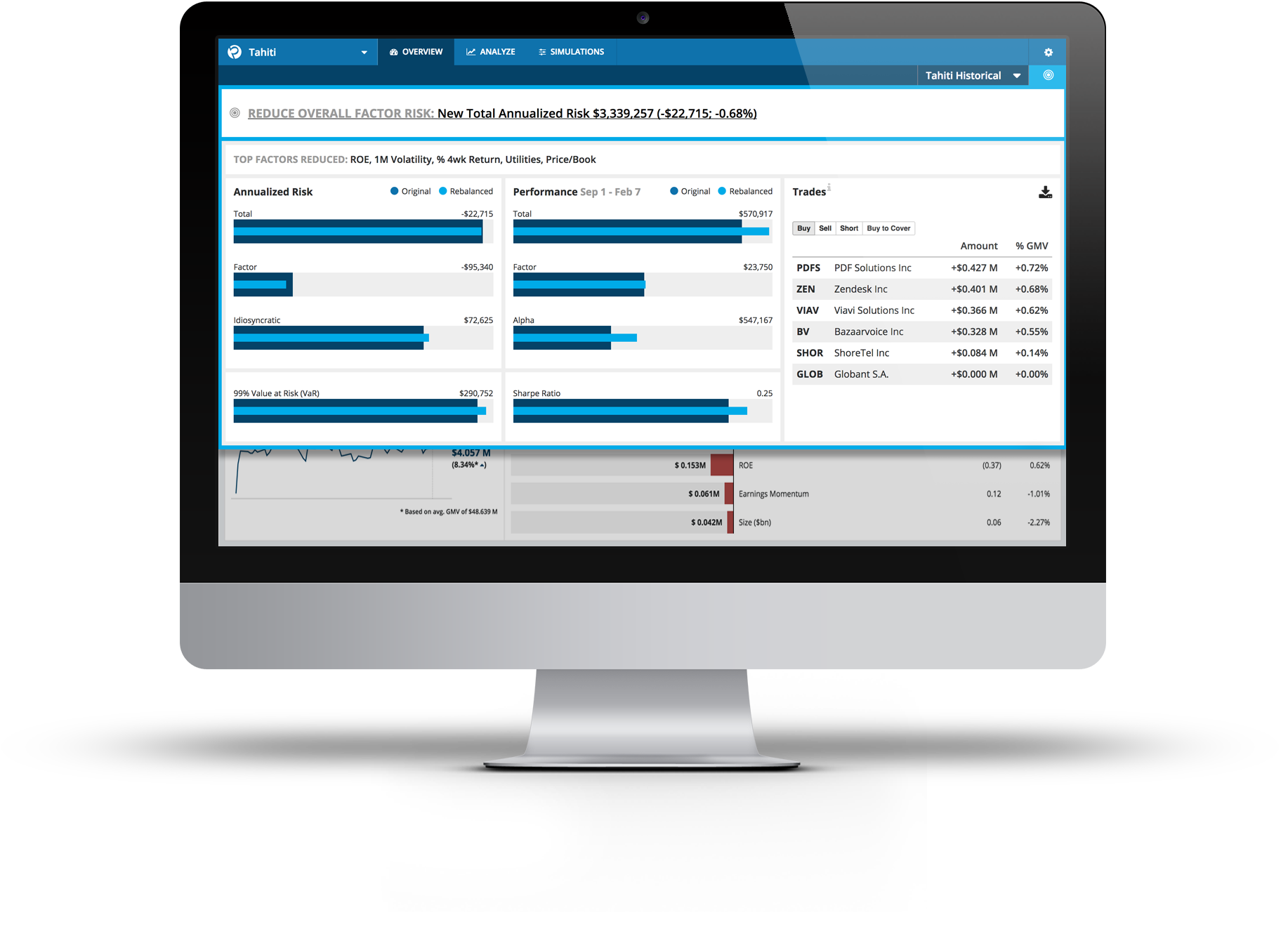 Omega Point's easy-to-use web-based analytics platform is a one-stop strategy analysis dashboard that provides managers with an in-depth view of the factors that are driving their portfolio's performance.

Our comprehensive factor model library, with coverage of 70,000+ securities, allows you to quickly build a multi-dimensional view of your portfolio’s exposure in real-time to market factors across styles, sectors, regions, and asset classes.

Visually detect market patterns and unwanted factor bets that are detracting from you unique investment style. On average, Omega Point has helped reduce portfolio factor risk by 30% and increased overall returns by 14%.

Omega Point's Developer Platform allows you to pull our data and factor analytics directly into your internal systems, applications and most third-party platforms.

When used with Omega Point’s powerful application workflows through Portfolio Intelligence, the result is an organizational win-win that enables closer ties between PM’s, development teams and the middle/back office.

All managers, whether passive or active, can take advantage of quantitative insights without sacrificing their own unique investment style.

Is There Capacity in the Alpha Opportunity Ratio?

This week, we continue our analysis by highlighting the application of this ratio and offering a heuristic guide for understanding the attractiveness of stock picking within an analyst coverage universe.

Where is Diversification Hiding?

Alpha and diversification have been especially elusive since the start of the pandemic in early 2020. As we’ve discussed previously, common systematic factors grab a tighter hold of stocks during periods of market stress, and assets begin to get pushed in a much more correlated fashion. So, to supplement our research on the return of alpha opportunity in the market, we will explore diversification this week.

Ripple Effects of the Infrastructure Bill

The buzz continued around the $1 trillion US infrastructure bill this week, as the bill faced unexpected rocky roads in the House. However, the House was able to clear a path for the bill and now targets a vote on Sept 27. Though there is still uncertainty around the bill’s final details, it feels clear that the focus on infrastructure spending, along with an emphasis on sustainability and clean energy, is here to stay.

Infrastructure Spending: How Much Juice for Clean Energy & the Grid?

Before we jump into this week's topic, I wanted to mention that my colleague and ace Factor Spotlight author, Alyx Flournoy, is featured in a just-released video from Qontigo that highlights its partnership with Omega Point. In addition, Alyx briefly demonstrates how to analyze a portfolio on the Omega Point platform using the new Axioma Global Macroeconomic Projection model, which quite coincidently also makes a key appearance in today's analysis. We encourage you to check out the video here.

Now on to our focus topic of the week. On August 10th, the Senate voted in favor of a $1 Trillion bill that addresses a wide array of infrastructure funding, notably power and transportation. Two key areas of spending are modernizing the power grid and, more broadly, mitigating negative climate impacts through clean energy. While the bill still needs to get through the House this coming week, we decided to look at stocks most likely impacted by these aspects of the proposal to understand the broader characteristics and key common factor influences that have and will continue to drive risk and performance.

What People Are Saying